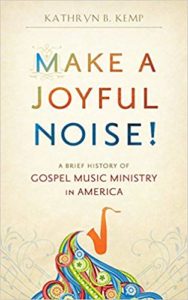 Gospel as a distinct musical genre has a long rich history that pre-dates our enslaved ancestors’ arrival on these shores. It begins with the instruments used in the religious rituals of African tribes as diverse as the Asantes and the Bantus to the songs Africans sang on the transatlantic slave ships en route to the Americas. The gospel music thread extends to the “code songs” that slaves sang to communicate their plans to escape the horrors of slavery in the South.

The spirituals that were the creative offshoot of these code songs, influenced the secular “gospel blues” made famous by the “Father of Gospel Music,” Thomas A. Dorsey. Gospel evolved further with the heir to the Dorsey legacy, Rev. James Cleveland, who, for 30 years contributed more to the acceptance of the genre than any other musician.

James Cleveland mentored a young generation of gospel performers who have ushered the genre into the twenty-first century and to widespread secular acceptance with their rap and hip-hop interpretation of the gospel message. In Chapter 1, the author traces the roots of gospel music ministry from its biblical basis to its African heritage. Chapter 2 discusses gospel music of the early twentieth century under the influence of Professor Thomas A. Dorsey. Chapter 3 follows gospel music to the end of the twentieth century, under the influence of Rev. James Cleveland and the formation of The Gospel Music Workshop of America, INC. and Chapter 4 examines the musical heirs to James Cleveland in contemporary gospel music.

Chapter One: The Roots of Gospel Music Ministry

“Make a joyful song unto the Lord, all ye lands. Serve the Lord with gladness: come before his presence with singing.” —Psalm 100: 1-2

The proper place of gospel music in today’s music ministry is often debated. Gospel music, in general, is defined as Christian music that expresses a religious belief. Its primary theme is praise, thanksgiving, and adoration to God the Father, Jesus Christ, and the Holy Spirit. The Dictionary of Fine Arts defines gospel as “intense joyful music that is associated with evangelists of the South—especially among African Americans” (Hirsch 2002).

While praise and worship services in Protestant and Pentecostal churches feature gospel music to prepare the hearts of the faithful for the message of God’s Word, gospel music is also a fine art, as acknowledged in The Dictionary of Fine Arts. It is sung, played, and performed in many venues beyond the church setting. The Columbia Encyclopedia classifies gospel music as “…the American folk music … of enslaved African Americans from West Africa, converted to Christianity in the South” (2011). The Oxford Grove Music Encyclopedia describes it as “the shared religious heritage of both blacks and evangelical whites” (1994).

Gospel music has its own distinctive style. It is repetitive in nature and allows the audience to join in the experience through what is known as “call and response.” The leader calls a word or phrase, and the choir and audience answer in response. Gospel music draws primarily on two black musical traditions: the spirituals and lined hymns of the 1700s through the 1900s and the blues and jazz rhythms of the twentieth century. Blues and jazz rhythms, known for their syncopated beat, is sung behind or after the beat–a marked distinction of hymns and anthems. The singing of gospel music is accompanied by a variety of instruments and is punctuated by the hands and feet of the singers and audience.

Jazz and gospel music share similarities in composition, both in their note structures and rhythms. The music appeals directly to the emotions of the listeners, who pat their feet and beat or clap their hands in accompaniment to both musical styles. Critics, for this reason, argue that the only difference between the two forms is where they are played: one in secular venues and the other in religious services. This distinction has been blurred since the latter part of the twentieth century, however, as both musical genres are performed on stages, in auditoriums, and in concert halls, with gospel music no longer restricted to religious services. The human voice, piano, organ, harmonica, guitars (lead and bass), steel drums, saxophone, and horn are frequently used in all of these musical genres.

© 2011 by Kathryn B. Kemp
Published by Joyful Noise Books, Chicago, Illinois
No part of this book may be reproduced or transmitted in any form or by any means, electronic or mechanical, including photocopying, recording, or any information storage retrieval system, without prior permission in writing from the publisher.